So Alex and I went to see Captain America on Friday, and I really have to be better about deciding what I want. (Talk about a segue.) I wasn’t that interested in seeing the movie, and Alex gave me a perfect out. I didn’t have to go with him, and I knew that, but I decided to go anyway, and then I had a chip on my shoulder for pretty much the whole thing. Hopefully it didn’t show too badly, and I hope I didn’t ruin Alex’s enjoyment, or take it out on him. I don’t think I did, but if so, it certainly wasn’t my intent (if I did, honey, I’m sorry). I just felt like I didn’t need to help give yet another superhero movie yet another stupendous box office weekend, especially when indie films no longer get a chance in the theatres.

I’m still not sure why I went. I think the primary reasons were:

I also remembered, once the opening titles started playing, that Paul Rudd’s Ant Man is in this movie, so that’s not all bad. I adore Paul Rudd. (I do really like Robert Downey Jr. too, but he’s done at least five of these Iron Man movies by now.)

But I was a little grumpy about it, and wasn’t looking forward to it. I also have yet to stay awake during an Avengers movie—which, let’s face it, is what this Captain America movie really is—but that’s not necessarily a reflection on the film. I’ve definitely not been sleeping enough lately and it’s starting to catch up with me.

I also did enjoy parts of it. I don’t want to say it was a totally wasted evening, because parts were fun (and I love spending time with my honey). As I mentioned, I love Paul Rudd, and his Scott Lang/Ant Man is definitely entertaining and adorable, despite quickly defying all logic in this movie. I also really enjoyed the new Spider-Man. I don’t fully understand why they need to keep rebooting Spider-Man (except so that they can keep the rights), but Tom Holland was pretty fun in the new role, and it lightened things up a lot when he was on screen.

I have a few problems with these movies. The easiest explanation is, to paraphrase Rocky Horror, they’re not made for me. I’ve never read the comic books—not that that matters anymore (or ever?), and I’m no longer their demographic. That’s a big reason I named this blog Geek Adjacent, because I’m not full-on geek enough to really appreciate these stories.

But as I’ve mentioned here before, I’ve been suffering from Comic Book Hero Burnout for about six years, and there’s no relief in site. The only saving grace is that they’re finally starting to tell a few women’s stories, the best so far being Supergirl on television. But the movies aren’t progressing fast enough for my taste, and no matter how kickass the women are, they still need saving. So far the movies are all the same men telling the same male-dominated stories. At one point Sam the Falcon (Anthony Mackie) says “everyone’s got a gimmick,” to which I replied, “and yet, it’s all the same thing.” I laughed at the line, but I still feel that it’s a lot of the same stuff over and over again.

I also tire of the conflict, especially in these situations where former friends are pitted against each other. It’s not a huge yet subtle change in character, like in Buffy the Vampire Slayer when Angel suddenly becomes the Big Bad Angelus. It’s just a disagreement that makes them need to fight each other to the death, until they decide they’re better off banding together. Perhaps I’m not paying enough attention, but in Civil War, and the recent Batman v. Superman (which I thought was pretty terrible, and I know I’m not alone), the conflicts seem a little out of nowhere, or at least not explained enough. Then it’s solved just as quickly. I know we need conflict, but why is it such a hot commodity now to pit friends or allies against each other?

I happened to see Batman v. Superman on the same night Supergirl aired its Supergirl-The Flash crossover episode. We watched it as soon as we got home (we needed a cleanser!), and when I looked on The Twitters afterward, I came across this awesome cartoon by @Comickergirl (posted by @AlishaGrauso). It sums up so perfectly exactly the problem, and exactly why Supergirl’s crossover was so much better. 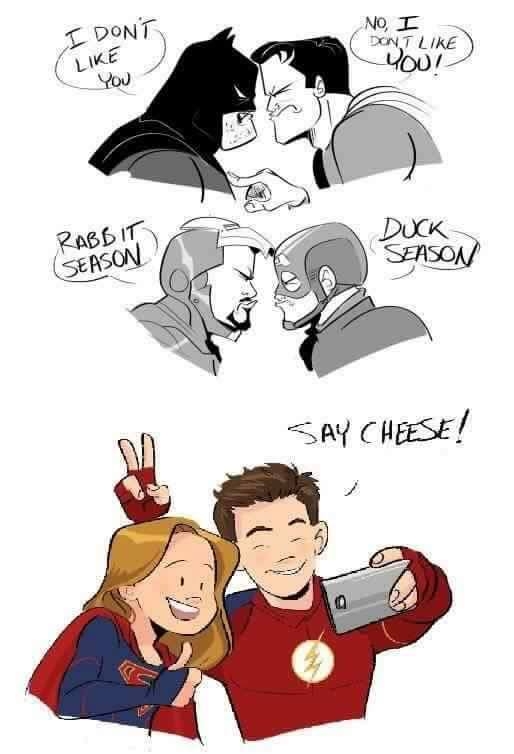 Generally, I’ve been looking for lighter fare these days. Romcoms have always been my go-to genre (as I’ve mentioned here before), but there’s entirely too much doom and gloom these days (ah, living in a post-9/11 society) and I prefer something a little lighter. That’s a big reason I love Jane the Virgin and Crazy Ex-Girlfriend so much. So to go to the theatre and have constant war, fighting, and disaster porn (all the buildings torn down and the cities destroyed) is just tiresome and sad. It’s interesting that they’re finally looking a little at the consequences of all this disaster, but it just leads to more fighting and more destruction. It’s all rooted in revenge, which begets revenge, and it just leads to more cruelty and more death (whether we see the people affected or not).

I’m still not sure why I decided to go Friday, and part of me is a little glad I did, if for no other reason than I can write about this, but I probably should have stayed home and watched a romcom on TV. I’m working on an article about romcoms and need to do some research (ie: rewatch a few of them), so I probably should have. But at least I had a night out with my darling husband. Hopefully I didn’t make him too miserable in the process. And next time, I’ll have to think about it a little more.

What about you, readers? Have you seen Captain America: Civil War? Or are you, like me, tired of all the revenge and disaster and superhero men?