Disney’s latest film, Zootopia (which came out on DVD/BluRay June 7), was a well-received box office smash: adored by critics and fans alike, it brought in $75 million its first weekend. I was among those who couldn’t wait to see it. It was one of a scarce few new movies I’m actually excited to see in theatres these days, and I went opening night. 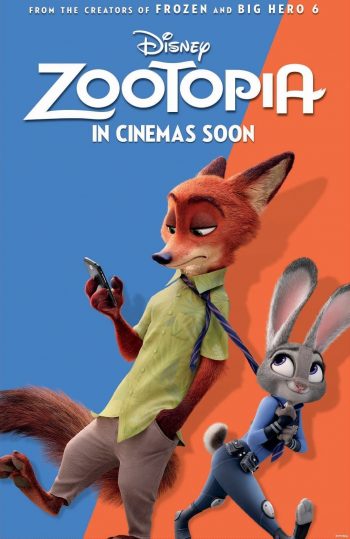 It did not disappoint. I was delighted with it, and was anxious to see it again. And again. In fact, I realized my adoration might verge on the unhealthy. Thinking about it makes my heart beat faster, my breaths quicken, and my eyes tear, as I get a goofy smile on my face. I adore the story and the social commentary. I love the theme song and its message. The naturalistic way the characters relate to each other. The adorable animation (especially as an animal lover): their physicality, and the expressiveness captured in their beautiful faces. I love the cast and the characters: the strong heroine, the complex antihero, and their developing relationship. The film is nuanced and multifaceted, kind and thought-provoking, funny and exciting. The whole package. But I realize that my love of the film and my desire to see it again and again goes beyond just admiring a well-done production. It seems to fill a desire in my heart that has been lacking. To make up for something that was missing.

I often lament about the status of movies today. There’s little that I’m excited to see, and it’s much the same thing over and over. There’s a serious lack of women and people of color represented in films, both in front of and behind the camera. There are no longer b-movies, only small independent films or huge blockbusters. And most of those huge tentpole movies are based on comic books. I’ve been suffering from Comic Book Hero Burnout for at least five or six years now, and while I enjoy the occasional comics-based movie (like X-Men: Apocalypse, which many others disliked), I find it to be more of the same men’s stories, told by the same men. It’s all revenge and hate and destruction and war.

I should also confess, as perhaps you can guess, that I love romantic comedies. While I enjoy other genres, like science fiction, dramas, and action, romcoms are my go-to. But tragically, they seem to have gone the way of the dodo. Especially the actual “romantic comedy”: not the Nicholas Sparks tearjerker, or the latest “I’m too miserable or ill to enjoy this romance,” or the “women behaving badly” sex-capade, or the “all good relationships start with a one-night stand” farce. No, a movie with romance (not necessarily sex) and comedy, and a fully developed relationship. In my overwhelming love for Zootopia and that heightening, familiar desire to see it again, I realize something: Zootopia is the closest thing we’ve had to a romcom, especially a successful one, in a long time.

Of course, it’s technically not a romcom, but that only makes it better. It’s not forced to abide by typical gender roles, or to follow romcom clichés. In fact, it addresses a few of those stereotypes and tears them down. And as a “kid’s movie” with lessons to teach and messages to convey, it starts from a more sincere place of strength and realism, despite being a cartoon. (Mild spoilers ahead.) There’s a multifaceted, resilient, interesting, and exciting female lead in Judy Hopps (voiced by Ginnifer Goodwin), a small bunny who embarks on an unusual but relatable hero’s journey. In the land of Zootopia, where all animals walk, talk, dress, and behave like harmoniously co-existing humans, Judy decides to do the impossible: join the Zootopia police department, filled with large predators like tigers, elephants, and wildebeests, as its first small mammal of prey.

On the way she meets Nick Wilde (the wonderful Jason Bateman), a cunning fox gaming the system with an excellently practiced con. He gave in to years of prejudice against foxes to become what they assumed he was, and it’s not until he meets Judy that he decides he can be better (well, after she wears him down). This unlikely couple—cop and criminal, prey and predator—slowly develop a close partnership, solve an enormous case, and put a nefarious criminal behind bars. They address racism (or species-ism) and sexism, and solve the mystery. Together, they face their few fears, put aside their prejudices, overcome the odds, and become the best versions of themselves they can be, all while making Zootopia a better place. 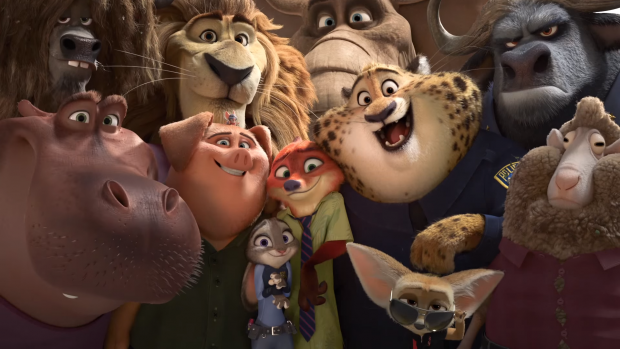 Their relationship is so lovely. They both have comprehensive story arcs that allow each of them to grow on their hero’s journey. But they also grow as a couple, too. Like many great Pride and Prejudice–influenced romantic couples, they start as adversaries, on opposite sides, believing in opposing ideals. They slowly wear each other down, developing a respect and appreciation for each other as they save each other from trouble and work together to unravel the mystery. They laugh, they develop trust, they share secrets, and they grow.

Others have called Zootopia a buddy film, and it certainly is, but I say it’s more of a romance. True, all romances are buddy films of a sort. While it never really gets romantic and Judy and Nick’s relationship certainly doesn’t get physical—it is still Disney after all—their love for each other grows as the film goes on. Nick’s last sentence is: “Do I love you? Yes, yes I do.” It’s so sweet.

It’s so wonderful to have a strong, real relationship—even between a cartoon bunny and a cartoon fox—that is not based on a one-night stand, a misunderstanding, or a co-dependency. It’s not miserable or depressing, or over-the-top raunchy. Whether it intended to be or not, Zootopia feels like a return to the classic romcoms of yesteryear, but better: with a strong female lead who doesn’t hold to the same gender stereotypes.