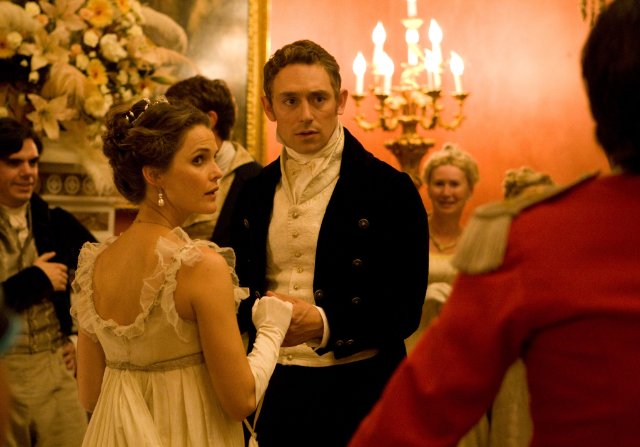 As I’ve said here before, I’m a big fan of romantic comedies. In fact, I admit there are times when I need to watch them. But with the low quality and quantity of today’s theatrical release rom-coms, I tend to go back to the old standards.

Pride & Prejudice, natch, is one of the classic stories (this year marks its 200th anniversary) that I—and many others—return to. It’s had many direct and indirect film adaptations, from the Colin Firth BBC classic miniseries to the smaller-commitment-but-still-brilliant Keira Knightley film, to Bridget Jones’s Diary, You’ve Got Mail, and the recent Emmy-winning, online, modernized adaptation, The Lizzie Bennet Diaries, which I just discovered and devoured. Even films like When Harry Met Sally and tons of television shows use the convention that I believe started with P&P: the couple have an awkward or uncomfortable meet-cute where he falls in love with her, but she instantly forms a negative opinion of him. Of course, by the end of the film, she reciprocates and they live happily ever after. There’s a reason the story is so timeless, and so frequently copied: it works.

Austenland is the latest film to use this convention, and I was really excited to see it—not just because it’s an Austen-based romantic comedy, but because it peeks into, or at least hints at, the world of historical reenacting, a world I have experience in. I’m always happy when pop culture references this fringe society, especially in a remotely positive way. 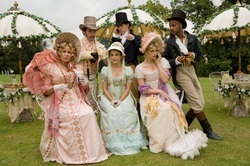 Keri Russell plays Jane, a Jane Austen fanatic who spends her savings on an English resort of sorts where she can live out an Austen-type fantasy. For a week, they dress in period clothes, do activities that were common during Austen’s time, and renounce all modern technologies. The movie addresses how the line between the real world and this fantasy world can blur.

Because Austenland pays homage to Jane Austen, especially P&P, it makes extra sure to use those characters and those conventions. There’s a Mr. Darcy character (Mr. Nobly, played by J.J. Feild), there’s a Wickham character (Bret McKenzie’s Martin), and Russell’s Jane is of course Lizzie Bennet, even though she’s named Jane and Jennifer Coolidge’s character is named Lizzie.

It’s not a perfect movie, by any means, but it is a lot of fun. There’s quite a lot to laugh at, from the taxidermy animals that populate the grounds, to the attempts Ms. Coolidge makes at sounding formal and aristocratic. We don’t learn enough about Jane before the story starts, so it’s sometimes difficult to see how much she changes by the end. For example, she seems to have a certain amount of backbone, but she’s definitely put in situations where she should stand up for herself more. I also felt there were a couple of missed opportunities. 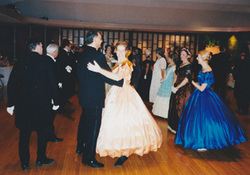 The biggest affront to me, personally, was the lack of dancing, and how terrible the little bit they showed was. My previous career was as a dancer and scholar specializing in nineteenth-century dance. It’s possible, and not too difficult, to learn some proper dances of Jane Austen’s period, so I was disappointed that there was so little reference to it in the film. But, sadly, that’s certainly nothing new for Hollywood. 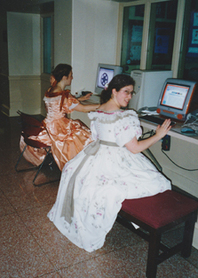 While watching the movie, I wondered how other people interpreted it, or what they thought of it, because my background and experience allows me to put myself more directly in Jane’s shoes: I have actually done historical reenacting, and participated in nineteenth-century balls and weeklong period events. It’s definitely fun to travel back in time and immerse yourself in another era—though I’ve never been so fully immersed that I couldn’t use a cell phone if I needed one. As much fun as it is to pretend to be a part of that era, there are definitely things about modern day that I would prefer not to live without, from indoor plumbing to cyber plumbing (aka: the Internet).

While I don’t have the proper gown for Regency era (18-teens) formal balls, I have studied and taught dances from that period, and I’ve participated in many 1860s, 1890s, and 19-teens balls. It’s great fun, especially as a dancer first and a seamstress second, and they can be wonderfully romantic. Couple dancing is romance, generally, which may explain why Dancing with the Stars is so popular. There’s built in romance, even when the partnerships are forced (and some of them are definitely forced).

In dancing and in reenacting, like in Austenland, it is very possible for the line to blur, and for people to forget what’s real and what is make believe. Austenland (the fictional place) featured hired actors who made sure the attendants could live out some of the fantasy they expected, which of course made the lines blur even more. The events I’ve been to didn’t have hired actors, but all the participants are playing characters. The fact that we’re pretending to live in another era means we’re automatically not being ourselves, to a degree. That’s a difficulty I always had: you could dress me up in fancy gowns and finery, but I’d still act like twenty-first-century me—especially as the evening wore on. That dichotomy is part of what made it fun.

To add to the difficulty of real vs. fake, especially at weeklong events, you were often there with others but separated from the world at large, immersed in the setting and blissfully ignorant of what was happening in the real world. It’s easier to more fully engage in the fantasy, and even if it isn’t the 19th century 24/7, like it is in Austenland, it’s still a fantasyland. That’s probably why it’s so disappointing when the week is over and you have to return home (what I call Post Event Letdown). 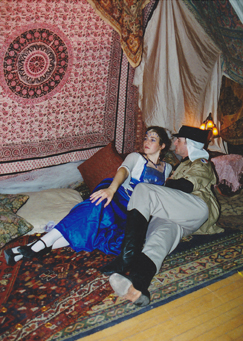 Live-Action Role Playing games, or LARPs, have a similar problem. I’m not a big gamer in that sense, but I have participated in a couple of LARPs, and I’ve been a “LARP widow” (I’ve had boyfriends who would disappear for week-long or 10-day LARPs). Here, people are definitely playing a part. Just like actors, they are improvising constantly, fully playing the character they’ve created for hours, even days. Some break character from time to time, while others don’t. I’ve definitely heard stories of people who have huge difficulty separating reality from fiction (and I slightly fell victim to one such person, though I was able to escape unscathed, more or less). This particularly affects people who are socially awkward, or perhaps unstable, in the first place. But you don’t have to be socially inept or unstable to get caught up in the fantasy.

As entertaining as Austenland was, I felt there were missed opportunities. Of course, everyone has different experiences, and there’s no reason Jane’s experience in the movie should be like mine at the events I’ve attended. But because there are reenacting events in our real world, it seems that the movie could have investigated this more, or at least portrayed the event more seriously in terms of properly and authentically doing the activities done in the period—like the dancing. Yes, I have an experience that others don’t: my background in dance history helps me fully appreciate the romanticism that’s inherent in dancing, one that was so closely captured by Jane Austen in her books.

I do feel that part of the reason Jane Austen’s stories are so romantic is because they take place in a time when gender roles, though limited, are more clearly defined, and dictated by decorum. Dancing is a more romantic part of that decorum. Perhaps that’s why so many nineteenth century traditions are still a huge part of 21st-century weddings. Dancing was a natural, integrated part of Jane Austen’s world, much more than it is today, and she captures the romance inherent in it (the Knightley film does a great job of showing this). Dancing is vulnerability; it’s a return to specific gender roles; it’s a chance to be closer to your partner (physically or mentally). It’s sexy and fun and romantic. And such a part of Austen’s world that Austenland could have done more with it. 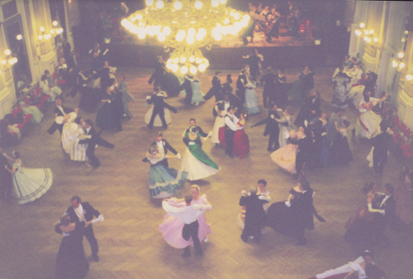 I took this photo at an 1890s ball in Vienna, Austria, in 1996.
So readers, what do you think? If you’ve seen Austenland, what was your take on it? Have you done historical reenacting or wanted to try it?

5 thoughts on “Dance and Romance in Austenland: Nostalgia For Days That Weren’t”