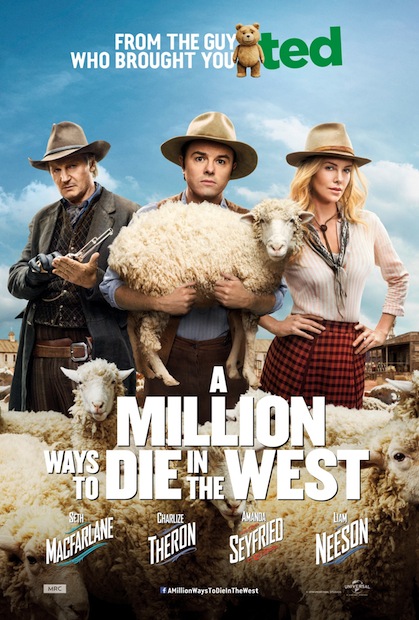 What is this feeling, so sudden and new? Ok, enough quoting Wicked.

Especially since it isn’t a new feeling. There’s a feeling welling up inside me that I vaguely recall, but I haven’t experienced it in a long time.

Movies have been disappointing to me lately. As I’ve written about before, I love romantic comedies, and the genre seems to be dying. When the rare rom-com does come out, it ends up either too raunchy (The To-Do List) or too depressing (Admission), and/or just not very good. I very much enjoyed The Other Woman (watch my new video discussing it), but it’s not so much a rom-com as a buddy movie. And the critics hated it. Not that critics need to like something in order for me to enjoy it, but the more rom-coms are reviled by critics (and audiences, though they supported Woman), the less likely studios are to risk producing them.

I’m completely burned out on comic book movies, though I’ll still see them with my husband. I even enjoy some of them, like Thor, but others not so much. Captain America: The Winter Soldier, for example, annoyed me. Too much rampant destruction for no apparent reason. And as badass as Scarlet Johansson’s Black Widow was, and she was badass, she still needed Cap to save her. Twice.

I’m also tired of all the sci-fi, and the reboots of movies that have been done, better, before. I still love going to the movies, and there are films I’m interested in, or curious about. But to be actively excited to see something—my heart beats faster and I smile goofily when I think of it, I’m thrilled when the trailer plays repeatedly, I can’t wait for it and plan to see it opening night. This is a rare thing these days.

So what is the wondrous new movie that has me so excited now? Seth MacFarlane’s latest venture: A Million Ways to Die in the West. I’ve seen the trailer a few times and it looks hysterical, with a fun mix of period flavor and anachronistic references. This poster alone cracks me up (though I’m surprised they’re able to get away with it). The costumes are gorgeous, and there’s a great cast, not the least of whom is MacFarlane, appearing as himself. The master of voiceover (Ted, Family Guy) is usually only heard and not seen, yet he’s adorable, with an attractive face that equally matches his smooth baritone voice.

He’s supported by Charlize Theron (not one of my personal favorites, but that’s fine) as his presumably romantic interest, and a bevy of great comedic actors, including Giovanni Ribisi, Sarah Silverman, Liam Neeson, Amanda Seyfried, Christopher Lloyd, and one of my absolute personal favorites (making up for Charlize, I guess), The NPH, as a literal mustache-twirler.

What’s more, Neil Patrick Harris appears to dance, and probably sing, in the film. The trailer shows snippets of a western saloon dance, probably with cancan dancers, which thrills me beyond belief: I’m not just a lover of musical theatre, but I studied the cancan at length for my dance masters thesis. I can’t wait to see what they do with it.

I’m still a bit trepidatious, especially after my husband pointed something out: It could be much more violent or bloody than the trailer implies. It’s no spoiler to say that people die in the movie; it’s right there in the title, and all over the trailer. Come to think of it, it’s kind of bizarre, for me especially, to be excited about a movie about people being killed off. Generally, I don’t do horror, or blood and guts.

Then again, it’s time for me to let that go. My favorite musical is Sweeney Todd, I absolutely love the show Dexter (at least before the series finale), and I’ve watched Titanic nearly a thousand times. The body counts in those are ridiculously high.

Yes, A Million Ways is a comedy, and the deaths appear to be in cheek, in the most bizarre, ridiculous ways possible. But I know from Family Guy that MacFarlane can have a sick sense of humor and doesn’t shy away from blood, at least in cartoon form. We’ll have to see how it’s done here when the film opens on May 30, but hopefully it’ll still be entertaining and not too gross.

Getting excited about a new movie always has a certain amount of risk, especially these days when you can’t fully trust the marketing campaign to really tell you what a film is about. I may end up being hugely disappointed with the film—though there’s something to be said for deciding in advance that you’ll have a good time. But I’m definitely enjoying the excitement I feel now, and I welcome it. Considering this, it’s worth the risk.

5 thoughts on “I Remember This Feeling: I’m Excited About a New Movie”