Oh my goodness, readers! I’ve really fallen down on my goal of posting to my blog every week, but it’s been a really busy few weeks. A lot has happened in the past month—in fact, I’ve been away from home for much of it—and I want to write about it all. But for now, to paraphrase the brilliant John Oliver: Just time for a quick recap of the month.

So what have I been doing? A lot! You may recall back in February I was working on a big, complicated sewing project in preparation for the JoCo Cruise. I’m happy to say I’ve successfully finished the project (though I need to buy a better tool for part of it and replace the one I used). I’ve even worn it TWICE, and it was a big hit both times. 🙂 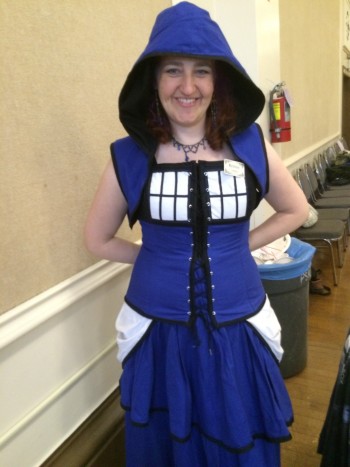 My Tardis dress, second wearing, at the Alice in Wonderland Tea Dance

So what is it, finally? Some of you guessed right, often based only on the color: it’s a Tardis dress! A sort of 19th-century looking version, designed by LoriAnn Costume Designs, and I love it. I think it came out really well, mostly, and I love how it looks. (The “mostly” is because I bought eyelets instead of grommets, not knowing there was a difference, so I want to replace them.) I’m pleased with my renewed sewing skills too—it was definitely complicated, perhaps more than it needed to be. I’m also grateful to LoriAnn herself for answering a few of my questions over email, not to mention the great design! Thanks LoriAnn! 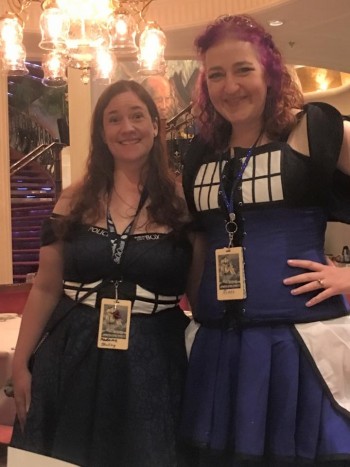 I wore the dress on the first Formal Night of the JoCo Cruise (I wore my regency gown on the second), and then again on March 6, for the Victorian Tea and Dance Society’s Alice in Wonderland Tea Dance. I know the Tardis doesn’t technically have to do with Alice in Wonderland, but it’s that fantasy take, and it’s fun. Plus, this awesome t-shirt would beg to differ. 🙂 I really need to get myself one of these.

So, we know about that now, but what about the last few weeks?

I admit I’ve been moving very slowly these past two weeks, now that I’m back and things are starting to calm down. I’m tired and just feel I need to take it a little easy, but I also know there’s lots to catch up on. I’m falling behind on my yearly goals too, so I need to get back on track soon.

So that’s what I’ve been up to lately, in a very small nutshell. I hope to write more about all of these things in the coming future. I didn’t take many pictures (or any, at SAM, grr), but I’ll share the few I took… Once I get the replacement battery charger for my camera and can get my pictures off there. So check back for that! 🙂

So how has your month been? Enjoying conference season? I hope it’s a bit more sane than mine was.

4 thoughts on “Flashback Friday: A Quick Recap of the Month”