Alex and I were talking this morning while I was checking my email and trying to decide what to blog about today. I opened my daily email from Tee Fury, an online geek T-shirt shop with $12 designs available for one day only, and today’s design (by Florey) had to do with that irritating “red cup” issue from Starbucks that everyone’s in an uproar over. I find the whole non-issue completely ridiculous and annoying. It is such an unimportant issue that we shouldn’t even be discussing it, let alone getting our “politicians” involved to further divide the country over it. We all have much more important things to concern ourselves with. 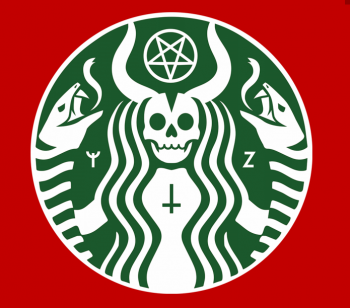 I heard on The Daily Show (on which, btw, I’m really enjoying Trevor Noah), that the whole ridiculous argument was started by one Kevin James-lookalike jerk on social media—who only did it in order to get a rise out of people! He was not speaking honestly about the issue (which shouldn’t be an issue anyway). No, his main objective, his entire goal, was to stir up trouble.

Why is that necessary in life? Why the hell is that something you want? You got notoriety out of it, good for you. But in the process, you’ve helped screw up everyone else’s quality of life. F-U, a-hole!

I’m in kind of a snit today anyway (because of something else I’m dealing with, which maaaybe I’ll choose to write about in the future), but I really want to curse this guy out. But I’m trying to keep my blog relatively clean.

It turns out that he’s a huge conman, and he’s been running a few schemes to take advantage of people. How he got so many followers in the first place, I’m not sure, but they keep buying into his crap (and buying him crap). Happily, I’ve found a few places that are trying to expose him for who he really is. I just hope people learn from it.

But I really don’t understand what people get out of doing this kind of thing. Like, people who create computer viruses? They don’t even get notoriety out it. What do they get from it? How does it benefit them to hurt other people that way?

Alex and I “joke” all the time that if some criminals or scammers spent the amount of time working on legitimate projects that they do on scams, they could actually make a good living and maybe make the world better at the same time. I know, that’s an extremely simplified view and I’m not going to get into how sucky the economy is right now blah blah blah, but honestly. What do people get out of that?

When I mentioned this red cup stuff to Alex, he said “blog post,” and asked what my Friday theme was. I immediately replied, “F— You Friday.”  🙂

So here you go. Why not do a F-U Friday? This probably won’t be a regular thing… I hope, but please enjoy it while it lasts.

What about you, readers? Does this situation annoy you as much as it does me, or do you actually agree with what the guy says? Did you know he’s a con artist? Should I keep F-U Fridays as a theme? 🙂

Like Loading...
November 13, 2015
Alex Featured Holidays News Perceptions Rants and Raves 4 comments camusr6
← Project Runway Junior and The Self: Do You Know Who You Are? Caturday: American Ninja Kitty →