I don’t understand the concept of hate-watching television. You know, the phenomenon that started a couple years ago, presumably with shows like Smash and The Newsroom, both of which I mostly enjoy. Apparently, an alarming number of people watched these shows while, as The Daily Beast puts it, “gleefully talking and writing about how the only reason they were tuning in was to bask in their irritation over how bad the shows were.” The practice is under discussion again, because tonight is one of the biggest hate-watch events of the year: NBC’s Peter Pan Live.

Allison Williams, as Peter Pan, and Christopher Walken, looking a bit too much like Dr. Fu Manchu, in Peter Pan Live. (Photo by Nino Munoz/NBC)

While reading The Daily Beast’s interview with a few of Peter Pan Live’s stars, who are bracing themselves for the snark-storm that’s headed their way, I found myself thinking again about the concept, one that I never understood and don’t think I participate in.

I genuinely love The Newsroom, despite its many flaws (and I know it has many). Smash I also mostly enjoyed, especially the first season. Yes, there were problems there, specifically with Julia Houston’s (Debra Messing) affair and with Ellis, the most love-to-hate character of the season and part of why the hate-watching phenom began. But I loved what they were trying to do, and as a musical theatre fan, I really enjoyed the musical numbers. I didn’t think it was as awful as others thought, so when they tried to “fix” it in the second season—only to make it a thousand times worse, I was truly disappointed. But I still watched it in earnest, investing (as best I could) in the characters, hoping it would improve, and enjoying the musical numbers.

Glee is another show that’s mentioned as a hate-watching vehicle. I had a complex and confusing relationship with Glee (and that was before the whole Jonathan Coulton “Baby Got Back” fiasco), because I loved what it wanted to be, and really appreciated what it was trying to do. I just hated the way it did it. I looked forward to watching it, every week, but I was always—always—disappointed. (This is back in its first few seasons, by the way, when most others thought it was good). I admit I had an expectation of what I thought it would be, and I was disappointed when it didn’t meet those expectations, but that’s not the only problem. The episodes were completely inconsistent, the storylines ridiculous, and the music hugely overproduced. I wanted the glee club to at least pretend to have some rehearsals, instead of instantly knowing the music and performing it perfectly—with exquisitely autotuned pitch—on the first try. Eventually, during season three I think (how I lasted that long, I’m really not sure), I finally had enough and officially gave up.

But I wouldn’t call that hate-watching either. I genuinely wanted to tune in, and I was hopeful for what I would see. That I was continually disappointed seems irrelevant. I didn’t tune in to bask in its inadequacy or rail against the show to anyone other than myself . . . and my poor husband, a victim of proximity. 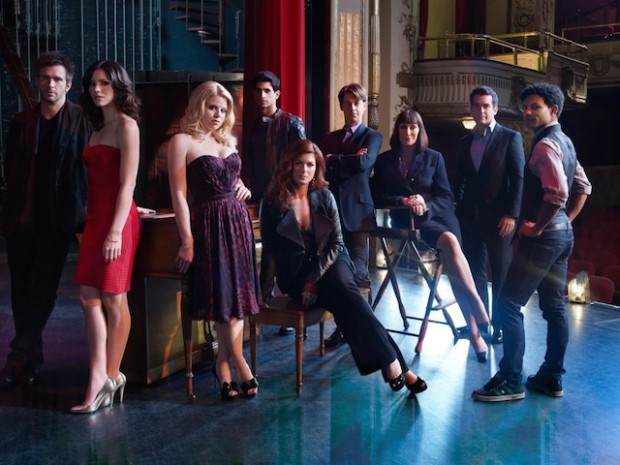 The Season 1 cast of Smash.

I say I don’t think I’ve participated in hate-watching, because it’s possible I did it this season with the new sitcom Manhattan Love Story. As I’ve mentioned before, the pilot was awful, yet I watched the episodes that followed anyway. But I didn’t watch them so that I could make fun of them, or necessarily bask in how awful they were . . . I don’t think. If so, it wasn’t intentional. I watched more out of curiosity: to see if it would get any better, to know what happened to the characters, and to see whether it could possibly slake my thirst for romantic comedies on television (spoiler: it didn’t). I also wanted to feel like I gave it a fair shot.

That’s one of the differences, I think. If you watch something intending for it to fail, it has a very different flavor (and probably a self-fulfilling one) than trying to give something the benefit of doubt and allowing it a chance to impress you. Allow yourself to go along for the ride instead of feeling like you know better.

With the stunning amount of amazing television (new and old) available now, why waste time with shows that you don’t get pleasure out of? I guess the real enjoyment of hate-watching comes from being snarky on Twitter—the primary outlet for snark around the world—and being able to share that snark with others who agreed on what to be snarky about.

I certainly understand the appeal of Twitter, especially with a situation like Peter Pan Live, where people will probably be participating in the unfolding live destruction of a beloved classic children’s musical. I may also chime in and read along, because the idea of being part of the conversation and part of the community is very appealing. I admit I did participate last year with Sound of Music Live (also enormously bashed on The Twitters), but my tweets weren’t particularly snarky.

I admit I have a difficult relationship with Twitter, because I do feel pressure to be clever and funny, but I don’t feel like I have the gift of sarcasm the way others do. I tend to express my honest reactions, and I don’t aim to be negative. There’s too much of that in the world already. I definitely had some issues with Sound of Music Live, particularly Carrie Underwood (“wood” being the operative word—oops, I guess that’s snark), but I don’t think I was trying to be obnoxious for the sake of being obnoxious. I certainly didn’t tune in so that I could revel in its badness. In fact, it makes me sad when something, especially something I look forward to, turns out to be disappointing or done poorly.

It helps that I genuinely love musical theatre, so if they show a musical on television, I’m most likely going to watch it. That is my starting point for all these shows: Smash, Sound of Music, Peter Pan, and Glee. It’s sad to see that the majority of these hate-watched programs deal with musical theatre in some way, but it also illustrates a continuing theory of mine: that many people in mainstream society are afraid to give in and admit that they could like musical theatre. I don’t know if they’re afraid they’ll be thought as “gay,” or some asinine reason like that, but I suspect that’s true, at least to some degree. I think their distaste for musicals stems mostly from a place of ignorance, but I think the stigmas surrounding musical theatre are what keeps them from exploring it and learning about it.

I admit that I’m apprehensive about Peter Pan Live (as I am about the upcoming film adaptation of Annie too, and less so about Into the Woods, because I’m a musicals fan. I’m not sure what to expect with Peter Pan, mostly because of the two leads. I’ve heard that Allison Williams has a very strong voice, and I know Christopher Walken is an amazing performer and a musical theatre vet, but based on pictures and a few teasers, I’m afraid their performances will be static and mechanical. Even the picture above seems extremely posed. But I’m definitely going to give them a fair shot and see what they can do before making up my mind. And I know that other Broadway experts, like Kelli O’Hara and Christian Borle, whom I absolutely adore, will be there to save the day if need be. 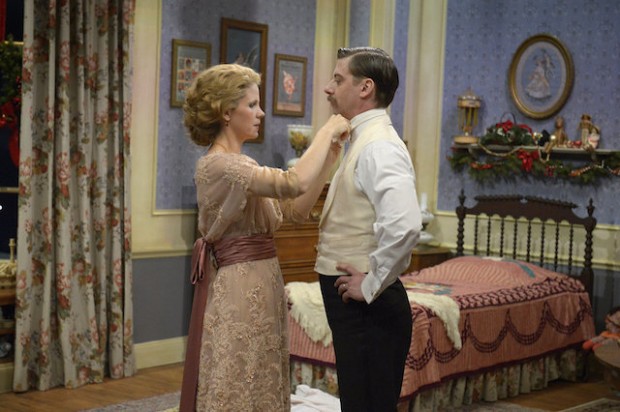 Perhaps I’m just naive, but I honestly don’t see the benefit in being super snarky—about anything or anyone—or watching a show with the intention of bashing it or making fun of it. I also don’t understand the whole hipster idea of liking something ironically. I honestly don’t get what that means. Either you like something or you don’t, but what do you get out of pretending to like something? I guess I’m too heart-on-my-sleeve emotional. I’ve always related to Meg Ryan, generally, but particularly in French Kiss: “Happy: smile. Sad: frown. Use the corresponding face for the corresponding emotion.” Why pretend to be something you’re not, or take pleasure in presuming the failures of others?

What about you, readers? Do you hate-watch programs? Do you plan to hate-watch Peter Pan Live, or give it an actual fighting chance?

6 thoughts on “Why is Hate-Watching A Thing?”