I have #SharkIssues. I’ve always been deathly afraid of sharks specifically, and of the ocean generally, ever since I was little. And my fear was completely irrational. Case in point: I was afraid to go to the bathroom because I was afraid a shark would come up through the toilet. Impossible, right? Yet such was the depths (so to speak) of my fear.

People would sometimes ask me why I’m so terrified of sharks, and my answer was always “why not?” They’re inherently scary creatures, huge and threatening, with sharp teeth and dead eyes. What the hell is there not to be afraid of?

That’s not a good enough answer, apparently. “Did you have an encounter with one, or something that made you so afraid?” they’d ask. It’s not like I do experiments on sharks or hang out where they are—I rarely even go to the beach. So why be so afraid of something that I’m so unlikely to encounter?

I don’t recall any situation that would cause me to have such an irrational, out of nowhere, fear of the sea. I’d never encountered a shark or whale, except at museums or aquariums, but by that point I was already afraid of them. I remember going to the Metropolitan Museum of Natural History as a kid and seeing the giant blue whale suspended from the ceiling. The sheer size of it freaked me out. I was never fond of swimming and I almost never go in the ocean because I’m afraid of what’s down there. I don’t even like eating fish (shellfish are just giant sea insects).

My brother was pretty much a terror to me growing up: teasing me incessantly, beating me up, verbally abusing me, calling me fat and stupid, doing all the things that “normal siblings do” (so he often says). My parents did very little to stop him. For one, I don’t think they knew what to do, but they were also performing musicians who were rarely home at night. My maternal grandmother would sit for us, and she worshipped the ground he walked on (she always wanted a boy and instead had three daughters). So when he tortured me while she was there, it didn’t matter. He could do no wrong. I remember one time my brother hit me, and my grandmother yelled at me for crying. Yeah, that’s fair. 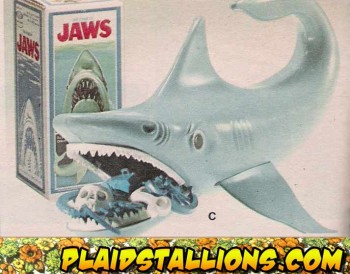 When the movie Jaws came out (1975, I was 5 years old), obviously everyone became obsessed with, and terrified of sharks. Some sadistic game company even created a game where players tried to place objects into or pull them out of the mouth of a plastic shark that sat up on its tail. If you weren’t quick enough, the mouth of the shark would clamp down on your hand, and you’d lose.

A few years ago I was visiting my parents, and while looking at childhood slides, we came across one of me at Sea World. I was probably 4 years old, smiling, straddling a statue of a dolphin, and showing off a wax toy dolphin to the camera. Yes, dolphins are sweet and not so bad as sea creatures go, but I’m still not terribly fond of them. So this picture surprised me. I vaguely remember it too, how the wax toy came from one of those machines where you put a coin in and choose what kind of creature you want. But how would my crippling fear have let me go to an aquarium in the first place, never mind looking relaxed and having a good time?

I asked my father how this could be, and he explained something to me. Apparently, we had that Jaws game; my parents bought it for us after my brother begged them for it. As soon as we got it, my brother spent his days chasing me around the house with it, torturing me with the thing for hours on end.

I had absolutely no idea. Apparently I had fully repressed these memories, and I was completely dumbfounded when my father told me. I couldn’t believe it. To be told that there was a very real, very cruel reason for what I thought was just a natural fear—a reason that perhaps my parents could have prevented, or at least lessened. This was very upsetting to me. I remember my brother teasing me in swimming pools (on those rare occasions I would get in one), swimming toward me with his hand on his back like a dorsal fin, saying “duh-dum. Duh-dum. Duh-dum duh-dum. Duh duh duh dum….” But by that memory, it was already too late. I was already scarred. And I certainly had no recollection of the plastic toy.

When my father mentioned it, the image of the toy came back to me, but I don’t remember my brother chasing me around with it. I guess I’d successfully squashed that part of my memory, just chalking my fear up to the natural scariness of sharks.

My father has since said that he regrets buying “that stupid thing” and that he intentionally stepped on it, breaking it, in order to get rid of it. I’m sure he had no idea when he bought it what my brother was going to do with it. I wonder if those nefarious plans had anything to do with my brother wanting the game so much in the first place. He was always looking for new ways to torture me.

Now, I’m an “adult,” and I can see that my fear is completely irrational. Sharks are still terrifying, but the degree to which I was afraid is a bit ludicrous, and I can at least look at them now (well, after an initial gut-reaction flinch). In fact, I’ve watched a number of behind the scenes specials about Jaws, which I find fascinating, so I’ve seen chunks of the movie—out of context. But context makes a huge difference.

With the 40th anniversary of its release, Jaws is playing in theatres again this week. I’m thinking about facing my fears (“climbing back on the horse that threw me,” as my mother put it) and going to see it with a group of friends. Though I’m still waffling and questioning whether it’s the best idea, I had my husband buy the tickets, and I hope to have at least 6 others with us to protect me. I can’t believe it myself…But we should all do something that scares us, and this would definitely be my Great White Shark.

Update: I did see the movie in theatres! Here’s what I thought about it.

Like Loading...
June 21, 2015
Blockbusters Featured Film Horror Movies News 3 comments camusr6
← Why Is Titanic Still So Fascinating After 103 Years? I Survived Jaws, And I’m Better For It →