Welcome back to my blog! Today is November 1st, which is not only the day after Halloween, but the first day of NaBloPoMo–National Blog Posting Month!!

To refresh your memory, NaBloPoMo is an offshoot of NaNoWriMo: National Novel Writing Month. Every year in November, thousands of professional and amateur writers attempt to write a 50,000-word novel in 30 days. Quite an undertaking! I don’t really write fiction (though I’ve been thinking about trying it this year), so writing a novel sounds much too daunting for me. But I do have a blog, and I’d like to post on it more frequently, so National Blog Posting Month–where we post a new blog post everyday for 30 days–sounds right up my alley. So here we go!

You may recall I did NaBloPoMo (such a mouthfull!) last year, and successfully got through the whole thing. Happily. It was exhausting, but I enjoyed it, and want to do it again.

I’m a little nervous about this year, because I’ll be traveling around Thanksgiving and I’m not sure if I’ll be able to keep it up while I’m away. But if I don’t declare now that I’m going to do it, then I’ll probably end up letting it fall by the wayside. So instead, here’s my official declaration: I’m doing NaBloPoMo!

Please keep me accountable by reading and commenting on my blog. 🙂

For a quick start to the month, I’m going to share my Halloween accomplishments. It’s a little sad because I didn’t actually do anything for Halloween night (last night). My husband Alex and I went to an afternoon movie, and then went home and watched some television, but we didn’t dress up Saturday and we never have any trick-or-treaters in our apartment building.

But Friday night we went to a Halloween party at the house of some of Alex’s co-worker friends, and that was lots of fun. We chatted with lots of cool people, most of whom didn’t get our mash-up costume (but a couple did, with hints), and Alex got completely plastered, thanks to a massive White Russian his friend Shaun made that was mostly vodka. It was seriously more like 5 white Russians, and Alex drank the whole thing. Alex called it a Putin, because it was the strongest white Russian he’d ever had.

Here’s our costume from Friday night. Can you guess who we are? (It’s not as obvious as you might think.) 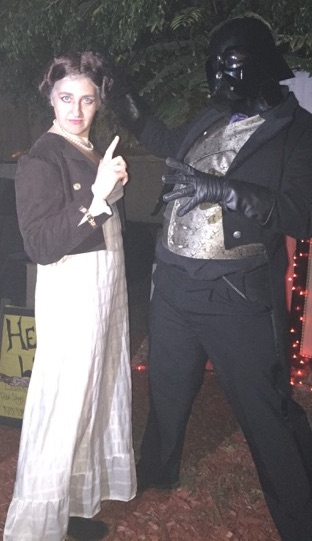 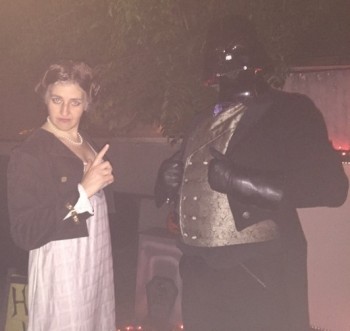 My other grand Halloween achievement this year is this awesome (if I say so myself) Grand March I made. Back when we lived in Maryland, in our house with the ballroom in it, we held dances every month, usually on the second Sunday. We always danced a Grand March–essentially a “follow-the-leader” walk around the ballroom in different patterns, usually danced to a long (8-12 minutes) medley of different tunes, often around a theme. The grand march is particularly good for Halloween because it’s a great way to show off your costumes. We liked to have at least 11 different grand marches to choose from during the year, because we had a dance every month (December was usually with a live band). So I had created a few grand marches to choose from. One of them was my Halloween march.

Since we no longer hold dances but I still really enjoy the marches, I had the idea of creating a video to go with the audio. I started working on it a little last year, but I started it kind of late and didn’t have enough time to finish it before Halloween, so I put it online with only the music. This year, I started it a little earlier (and I’m getting better with Adobe Premiere, so I was able to do it slightly faster), so I finished it earlier this week and put it up online. I’m really pleased with it, and it’s getting a little attention! The Mary Sue mentioned it in their Things We Saw Today column (Thanks TMS!), and I got some lovely comments after I sent it to the Society for American Music listserv (of which I’m a member). One lovely woman even said she showed it to her music theory and music appreciation classes, to help prove her points on populism in music and incorporating music with pictures as an educational tool. I love that so much!

Now I’m off to dress in my 1890s ballgown for a Victorian Tea Dance, so I’ll end this post with my Halloween Grand March video. Take a look, and I hope you enjoy it as much as I did putting it together.

I’d love to hear from you! Let me know a) your guesses for our Halloween costume, b) your thoughts on my Halloween video (hopefully good), and c) whether you’re participating in NaBloPoMo (or NaNoWriMo, NaPoWriMo etc) too. What’s your big plan for November? Respond in the comments.