I’m slightly at war with myself. Well, that’s kind of a constant state for me for lots of reasons, but there’s a particular reason right now why I’m getting anxious.

I want to start decorating my apartment for Christmas, but I know it’s still ridiculously early for that!

I know, it’s silly to be at war with myself over something so trivial in the grand scale of things. But there it is.

I hate that the Christmas season gets longer and starts earlier every year. I don’t like the commercialism and the rampant consumerism behind it, and as much as I like to get presents, I feel badly that corporations are running everything and lots of people are forced to work on Christmas instead of spending the holiday with their families.

But at the same time, I love Christmas lights! I love decorating, drinking eggnog, and getting into the holiday spirit, and my family is finally coming to California to visit me (their first time since I moved here), so I’m excited to see them. That is, until they drive me nuts after about 20 minutes. 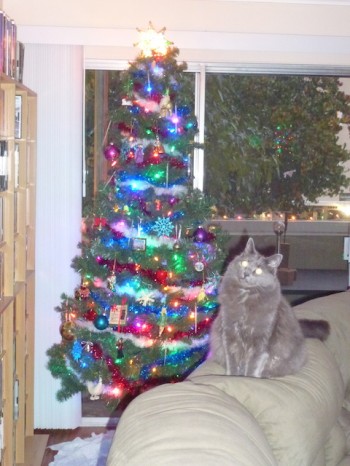 I can has Christmas Tree?

Truth be told, I leave some Christmas lights up all year round, because I love them. It’s mood lighting, and it’s beautiful. I don’t always plug them in, because it is slightly odd to turn on Christmas lights when it’s 90 degrees out and still light at 8 p.m. I also think summer nighttime is a different kind of dark than winter nighttime. Maybe it’s just because it gets dark earlier, but winter night feels darker, thicker, than summer night. Plus there’s that beautiful, crisp smell of winter in the air. If we’re lucky.

Yeah, the weather here really doesn’t help, either way. It’s so warm and sunny that it doesn’t feel like November and time flies so quickly that I can’t keep up anyway. But at the same time, because it’s still warm and it barely even rains, much less snows, decorations and daylight saving time are the only indications that it’s that time of year. That’s probably also why the soft rock radio station will go into their non-stop Christmas music starting tomorrow. In the middle of November.

In that case, maybe it’s not too early. If the radio station can do it, why not me? Oh, I know, I don’t have advertisers paying me to show my holiday spirit early. Ah well.

Still, despite the string of lights I have up year round, I do a lot more for the holidays. We put up a tree, and I also try to have a menorah (I’m technically both Jewish and Catholic, or neither), and I put more lights up around the house. Plus garland and stockings, and some little tchotchkes on the mantle, like a nutcracker, candles, and ballerina nesting dolls. Growing up as a ballet dancer, of course The Nutcracker has to represent in my house.

I’m trying to hold out until at least Thanksgiving—but I’m not sure it’s going to happen. It won’t surprise me if I end up at our storage unit this weekend to collect my decorations. I may not put them up right away, but it’ll be a comfort, if a little messy, even having them at the ready.

How about you? Are you anxious to start decorating, or are you trying to put it off for as long as possible? Or do you not bother with decorations in the first place?

6 thoughts on “How Long to Wait to Decorate”