Today is Sunday, November 2nd, which means Friday night was Halloween! I have to say, I’m pretty dang pleased with my costume for this year. It’s an idea Alex and I had tossed around the last couple of years as something that would be pretty cool, but we kept shooting it down because we thought it too difficult. Well this year, we said “hell with that,” and went for it anyway.

Can you guess who we are? Keep reading and you’ll see some hints along the way. 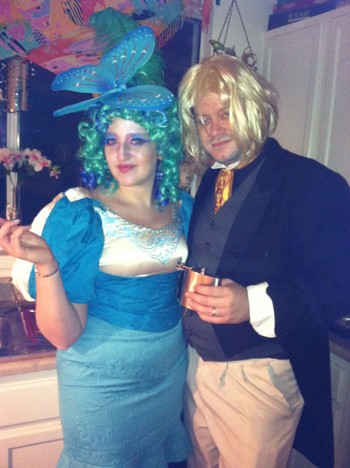 Can you guess who we were for Halloween this year?

Halloween is one of my favorite holidays, but I definitely like it for some traditions and not others. Mainly, I love costuming. I used to do a lot more costuming than I do now, specifically in reenacting period balls and such, so Halloween is definitely fun from that perspective. The problem for me is I hate horror, and I scare really easily. I don’t like practical jokes and I hate cruelty. This means that if people want to play a practical joke or sneak up behind someone, they’ll probably choose me as their victim. I’m a pretty easy target.

As an adult, I’ve practically forgotten about the whole trick-or-treating angle, which is somewhat sad. Truth is, I don’t eat chocolate at all, and I’ve always been more of a cake and cookies person than a candy person. I also live in an apartment now, and if there are any kids in my building, they apparently go to the nearby neighborhoods, but not around the apartment complex. We haven’t had a trick-or-treater in two years. I didn’t even buy candy this year. I certainly don’t need it in the house (I may not like it, but it won’t stop me from eating it if it’s here).

So I do Halloween for the costumes and the parties, not for the horror or the candy.

It’s hard to come up with cool costume ideas, especially ones Alex and I can do as a couple. Obviously we don’t have to do a couples costume, but I do think that’s part of the fun of being in a relationship.

Awesome costume ideas are harder as we’ve gotten older too. For one, we don’t have as much energy for it as we used to, though we still love it. We also tend to plan it at the last minute (partially because of the difficulty of settling on an idea). We also have a lot less stuff now. Between changing bodies, changing tastes, and changing locations from a big house to a small apartment, we’ve gotten rid of a lot of clothes and materials.

I like to do costumes that people will recognize and can identify, and I tend not to go for puns. If I had a brilliant idea for a pun, I’d probably do it, but they’re tricky to pull off (we’ve actually had one in mind for a couple of years, but we need to think about exactly how to do it, in a way that people could identify). So we like to pull from pop culture, since we both love TV and movies. The trick is finding costumes that are iconic enough to be recognizable by many. That’s hard to do—and of course you’re never going to hit absolutely everyone. It depends on how up on their pop culture they are.

For me too, if I’m going to dress up, I’m going to really dress up (hence the energy comment above). I’ve always embraced costuming full on. I like to do the full outfit, hair, makeup, the whole shebang. Wearing regular clothes with a little badge or nametag or some such over it is a little disappointing to me, and just doing a vague stab at the clothes is not enough, especially if it’s not an iconic person or character. Obviously to each their own, but that’s me.

The problem is, so many fun pop culture couples wear “normal,” everyday street clothes that change between episodes. Not terribly iconic, so unless you really look like the actor playing the character, it’s hard to recognize. Of course it’s possible to do some of these, and people have, but for me, it’s not enough of a costume. Couples like:

If you have suggestions for making these costume ideas more iconic, let me know in the comments.

I’m very proud of our costume this year. I thought we looked amazing, and the costumes definitely took some doing (especially considering I’ve put on quite a bit of weight since I last wore that top and it’s very tight now). 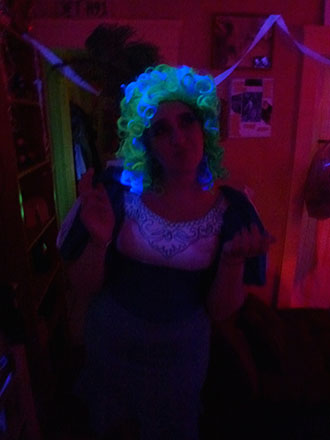 This outfit looks pretty cool in a blacklight too!

Did you guess who we’re dressed as? I’ve already given you a hint: we’re a pop culture couple. A pretty recent one too, at least as far as movies go (there’s a second hint).

The disappointing thing is no one at the party we went to really recognized who we were! I was so bummed. We got a couple of “oh . . . I know it, I recognize it. I’m sure I know it,” but eventually they had to give up. One or two got as far as Elizabeth Banks and Woody Harrelson, but couldn’t name the characters. That is understandable though, especially if you’re not as into the movies as we are. Those are difficult names.

If you didn’t guess already, we went as Effie Trinket and Haymitch Abernathy from The Hunger Games franchise. Pretty dang fun!

I just wish we had more of an opportunity for people to see us in costume.

How about you, readers? What do you love about Halloween? Do you like costuming as much as I do? Who did you dress up as for Halloween?

4 thoughts on “What Were You For Halloween?: Finding the Perfect Costume Idea”