It’s Video Vednesday! And though I say to you May the Fourth Be With You, I will refrain from any (further) Star Wars references. Instead, I thought I’d share a couple of my own dance videos! I’ve been going through my VHS collections and slowly converting them into digital files, so that I can hopefully archive them in a way that will last over time. I bought the handy dandy Elgato Video Capture cords and software, which connects my VHS player (yes, I still have a VHS player) to my computer so that I can convert these old videos. It’s awesome! It works well, and it’s pretty fun traveling through my history and watching some of these old clips! And since I’m getting back into dancing again, it’s good to remember these routines.

I still have lots more videos to convert—I have a lot of personal VHS tapes of performances and choreographies I did—but now it’s looking like I may need to go back and redo the ones I did. I’m not sure what my options are, but I’m a little disappointed with how poor the quality of some of these videos are. Yes, they’re old video cassette recordings (like from the mid-1990s to 2000s), so they’ll only be so good, but the more you convert them, the more they compress, and the more they lose quality. So by the time I put it on YouTube, another compression, they don’t look all that great.

This first video here is an example. It’s a video of the English Longsword dance team I used to dance with, Orion Longsword. They’re still around, and absolutely brilliant. They’re based in Boston, Massachusetts, and I danced with them the four years I lived there. I’m in this video, with the long braid down my back.

If you’re not familiar with longsword dancing, it’s a type of English ritual dancing done in teams, and each member of the team has a sword: a long, dull metal or wood “blade” that doesn’t bend (as opposed to rapper dancing, which is done with bendable swords). Members hold the handle of their sword in one hand, and the point of their neighbor’s sword in their other hand. They then dance, creating figures with the swords. The dances always include a star figure, often at the end, like so: 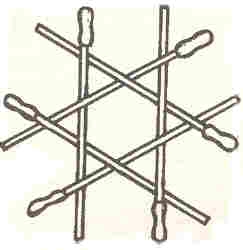 There are many different traditions of sword dancing, such as Sleights, Flamborough, Handsworth, and Grenoside, to name just a few, based on which part of England it’s from. What’s fun about Orion is our awesome leader and choreographer, Judith Erickson, also creates her own dances, based on the traditional routines. The particular dance shown here is called Salton. I believe it’s Judy’s reconstruction of a traditional dance, but I know it took her some figuring out to make the schottische (the one-two-three-hop, step-hop, step-hop) footwork work with the routine, and to find a tune to go with it.

I absolutely love this dance. It is so much fun (though I fully admit, more fun to do than to watch, as with most Morris and sword dancing), and the choreography is so cool. I love the footwork, the brisk tempo, and the awesome tune, Masters in This Hall, played so expertly by Jim Ialeggio. We also perform it really well, if I say so myself. 🙂 I love how the audience gasps when they realize we’re making the star. It’s a very unusual way to make a star, so it often catches people off guard.

That dance was performed at the Sword Spectacular in Scarborough, England, circa 1996. Someday I’ll write more about that amazing trip.

The second video I’m sharing today is of the vintage dance group I founded in Maryland in 2000, Centuries Historical Dance. (My husband Alex is a member, and is in this video; he’s the tall one.) We no longer exist as a group, since I moved to California in 2012, but in 2005 we created a DVD about Ragtime dances, called “Dancing Through the Centuries: Dawn of a New World.” It featured dances from the 1890s to the 1940s. Well, technically through the late 1920s, with the Lindy Hop, but people recognize swing as being a ’40s dance style, so we put ’40s in the title.

I confess to having an ulterior motive for posting this video today: I’m promoting the workshop I’m teaching in these kinds of dances! It’s May 21st, 2016, in Pasadena, California, from 3 to 6 p.m. The dances are fun and easy to learn, and you don’t need experience or a partner to take the class. If you or anyone you know will be in Southern California on May 21st, please consider joining us to learn these fun, entertaining couple dances! (You can find the event on Facebook, and tickets are available now through Brown Paper Tickets.)

This video is from the DVD we made (so the quality is quite a lot better), and shows the Castlewalk, which was a variation on the one-step created by Vernon and Irene Castle. As you’ll see, it’s a couple dance that uses a simple walking step. These are ballroom dances before they were standardized for competition. The choreography here is mine, based on steps I reconstructed from dance manuals from the early twentieth century. It features lots of one-step and Castlewalk variations, such as Backing the Lady, Pomander Turn, Grapevine, Marcel Wave, Airplane, Pivots, Hesitation, Snake Dip, Wind-up, and Zig Zag. And you can learn these and more at my class!

I hope you enjoy these videos, and perhaps learn a little something about a few different kinds of dance. And if you’re in the LA area, consider joining Alex and me on May 21st!